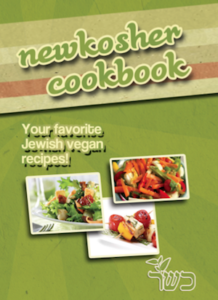 If you’re looking for animal friendly Passover alternatives, look no further than the NewKosher vegan cookbook. Chock full of Passover recipes, as well as delicious recipes for the entire Jewish year, this book is holy in more ways than one. Of course, who wouldn’t love Matzo-Potato Ball Soup, Salad of Romaine Hearts, Eggplant “Cookies” with Roasted Tomato Sauce, Oven-Roasted Baby Beets and Chocolate-Caramel-Almond Matzo?

In addition, check out some of our other great Passover recipes throughout the PunkTorah blog. We’ve made substitution recommendations for vegans:

This week’s Torah portion comes from Michael Croland, author and contributor to our sister site, NewKosher.org.

I have claimed in the past that when G-d gave the Jews in the exodus manna—a food that is widely accepted as vegetarian—He had “a chance to start over” with vegetarianism and He again “intended humans to be vegetarian.” This argument suggested that manna was the Jews’ lone source of food in the desert prior to the flesh mentioned in Number 11:31-34. I had based my argument on that of Richard Schwartz in Judaism and Vegetarianism, who said that “after the Israelites left Egypt, G-d tries to establish another non-meat diet: manna.” In a “Jews and Food” class this past fall, I reviewed the two chapters in the Torah in which manna was mentioned—Exodus 16 and Numbers 11—and I questioned whether manna was eaten as an all-vegetarian diet.

Manna was mentioned as a prominent food in those two chapters, but quail was also discussed. In Exodus 16:12, G-d told the Israelites, “By the evening you shall eat flesh, and in the morning you shall have your fill of bread ….” The following verse explained, “In the evening quail appeared and covered the camp.” Then in Numbers 11:4, some of the wandering Jews “felt a gluttonous craving” and said, “If only we had meat to eat!” In Numbers 11:33-34, after they received quail, they were punished: “The meat was still between their teeth, nor yet chewed, when the anger of the Lord blazed forth against the people and the Lord struck the people with a very severe plague. … [T]he people who had the craving were buried there.” The role of quail in Numbers 11 seemed to support the argument that G-d preferred vegetarianism, but the mention of quail in Exodus 16:12-13 appeared to suggest otherwise.

When I e-mailed Schwartz to ask for clarification, he replied, “The fact that the eating of quail is not mentioned in Numbers, before the Israelites cried out for flesh, and that Exodus 16:35 states that the children of Israel ate manna for 40 years, with no mention of eating quail for these 40 years, leads me to think that the initial eating of quail [in Exodus 16:12-13] was a singular event before the Israelites started eating the manna.” Schwartz also checked with a couple of rabbis, but their responses—which I do not have permission to quote from—offered varied, inconclusive reflections on the apparent contradiction.

I followed the paper trail leading from the citation Schwartz used in Judaism and Vegetarianism. Schwartz attributed his claim to “Rabbi Isaac Arama (1420-1494), author of Akedat Yitzchak” and included a footnote with three citations. First, I was unable to find an English-language copy of Rabbi Isaak Hebenstreit’s Kivrot Hata’avah. Second, a 1967 article supported Schwartz’s argument by calling the diet of the exodus a “second attempt to introduce a vegetarian diet.” However, this superficial overview—written by a reverend in a British publication called The Jewish Vegetarian—did not seem to bear much authority. Third, in Animal Life in Jewish Tradition, author Elijah Schochet noted, “Arama theorizes that G-d had hoped the Israelites, once freed from Egyptian bondage, would willingly subsist on a diet of vegetation.” Although I did not have too much information to go by yet, Schochet at least provided a direct citation to what Arama had written. When I tracked down the appropriate passage in Arama’s Akedat Yitzchak, I had my first a-ha moment:

“The fact that in answer to the Jewish people’s request G-d did provide meat, but in a manner much less gracious than the way in which the Manna was supplied, leads one to believe that the supply of quail was a one time occurrence. . . .

“[M]eat had not been part of their diet all along. Further proof that meat was an exceptional provision, lies in the fact that it came unaccompanied by such ordinances as the manner in which it had to be slaughtered, specific quantities per person provided, how long it could be preserved, etc., all details that were spelled out about the Manna.”

I looked into the perspective of anthropologist Jean Soler, whose name had come up in another class session. Soler did not conclude that there had been an “attempt to impose a vegetarian regime on the Hebrews,” but he pointed to the diet of the exodus as “[a trace] of such an attempt or, at any rate, of such an ideal.” Soler also said that manna was “the only daily nourishment of the Hebrews during the exodus” and added that the Hebrews demanded meat twice.

I also checked in with Rabbi David Kraemer, author of Jewish Eating and Identity Through the Ages. Although Kraemer stated that he had “no opinion on how these stories fit together,” he said that both Rashi and Nachmanides interpreted Numbers 11:4 to mean that “meat was available all along.” Nachmanides stated quite clearly that “there was not enough meat for the whole people to have every day, although they did eat it many times, for some of them had herds, but [only] the important people ate it [every day], as happens in camps and places where prices are high.” While I cannot say with absolute certainty that Rashi’s commentary takes as strong a position, I respect Kraemer’s affirmation that Rashi held the same view:

“If you say, “They had eaten them,”
is it not stated, when they entered into the Land (Num 32.1),
“Now the children of Reuben had a very great multitude of cattle,” etc.?
However, they (only) sought some pretext (for grumbling).”

As with so many other matters in Judaism, there is no unanimity on whether manna was part of an all-vegetarian diet. I will no longer look to claim that it was.